Sustainability with a smile 2020

The little things and the Joy they bring...

The corona virus has changed how we navigate amongst each other, around our local communities and even worldwide, but The Love & Light Project always finds a way if the cry for help touches my heart and sometimes, it’s the little things that can bring the greatest joy.

This little rescue mission came from a conversation with Julie Thinesen a local mother of two little girls, who lives in Munkebo Fyn Denmark. It was a personal request but I took it a step further.

She informed me how the kinder-garden that her children attended had very limited funds for supplies towards development of the children’s cognitive skills. This is where they would learn how to use scissors to cut out random shapes pictures photos, follow a straight line, paste things together, make a story through pictures, art and all that fun stuff 3 – 5 year olds do all day long at kinder-gardens.

Julie was hoping that I had some out dated or old magazines at home that I could donate to the kinder-garden for the children’s playtime. She was asking around to see what could be collected as a cost free alternative. The kinder-garden was so desperate they would accept anything.

So…  I decided to take a trip around the offices of LE KLINT sacrificed my lunch break, hijacked one of the company’s vans, grabbed two of our sales staff Thomas and Michael, as volunteers for a couple of hours and off we went on a sustainable recycling mission that to our surprise, on arrival, were three kinder-gardens.

Himmelblå, Columbus and Solbakken   Blue sky Columbus and Sunny Hill kinder-gardens. We informed the carers in advance, before we arrived, that we were all corona virus free and did our best to sanitize our hands and abide by the social distancing rules as best we could.

Like all the other causes in the past The Love & Light Project reached out to this community because it simply touched my heart.

I believed this village was a perfect candidate to receive a donation from The Love & Light Project.

It is amazing that an African village in Latin America, 150 km away from any modern day facility, such as a shop pharmacy a doctor a hospital or even a fast food stand, can still manage to survive and sustain their language, culture and their heritage, outside of the continent of Africa.

The residents of San Basilio de Palenque instil joy passion and pride into their children, while teaching them sustainability, being one and respectful of nature by way of recycling, upscaling old things into new and that a positive future is inevitable, if they continue to be   good boys and girls in school.

Storytelling music and dance are major influences of the educational system in this village. They focus on values such as, respect kindness and consideration for others, as being more important in life, than having the latest gadgets… However, a gift is always welcomed  and enthusiastically accepted.

Appreciation for life health and the basic necessities can help make tomorrow a better brighter day. The Love & Light Project’s quest for 2019 was to bring some Christmas cheer to this community, making sure that every child present, did not leave empty handed.

San Basilio De Palenque has a very relevant and positive message for us all ... Never judge a book by its cover, be happy and grateful regardless of the cards that life has dealt you because you never know who is watching and what changes that can bring.

The newly built Veterans Home (a centre for ex military service personnel) in Odense was officially opened by Crown Prince Frederik on 7 March 2019.

The centre's purpose is to create a safe and secure place where ex service personnel and their family members can meet, socialise and share stories and memories about their shared experiences in the armed services. The modern building can be used by all, including those who require care and support. It is a centre aimed at making the "return home" experience a pleasant one.

At LE KLINT, we believe it is our duty to look after those people who were sent out around the world to protect us. We are very proud that through The Love & Light Project, we were able to provide all of the lighting in the Veterans Home, helping to make the centre a comforting and relaxing place for ex military personnel and their family members.

In June 2017, the Love & Light project sent a 40 foot container filled with school furniture and equipment to three schools and a kindergarten in Portland in Jamaica. The area suffered extreme and widespread damage during hurricane Sandy in 2012.

2016 was a year of lectures at LE KLINT, outdoor concerts and sales activities on our SEASONAL Folds to raise funds and support for the Jamaica charity for 2017.

This year the Love & Light project reached out to The Royal Ballet School in Odense Fyn and supported their free for all Christmas show at City Hall. We gave stage lighting, helped with costumes for the dancers and I even gave myself and sung some songs in the show.

We especially helped one young dancer with great promise as a prima ballerina.  Elena Praastrup Nielsen.

Her journey to school every day is over 2 hours by train from Esbjerg to Odense. The expense of her school fees and the increase on her travel expenses was too much pressure on the family economy. They had applied for grants and asked for help from different agencies as The Royal Ballet Copenhagen is very interested in this girl but she has to complete her studies before she could even be considered to become a professional dancer.  So it looked like this was the end for her Ballet career.

The Love & Light Project surprised Elena with a large check that has allowed her to finish her studies at The Royal Ballet School in Odense and continue to fulfill her dreams.

10,000 children on the Danish island Funen, stand alone with problems like loneliness, abuse, violence and poverty. To create awareness regarding the problem, Ungdommens Røde Kors and Trygfonden have launched the “SEE ME” campaign.

ht project has supported the campaign with DKK 50.000. The Love & Light project’s creator Isa Dawn Whyte Jensen, states that it is important to support internationally as well as locally, and to especially make sure that the aid goes directly to the people who need it rather than to administration and other costs.
The campaign organized a charity dinner at Lykkesholm Castle with master chefs, music and entertainment.

On Wednesday November 5th The Love & Light Project lent a helping hand to a local fund-raiser Operations Dagsvaerk, by hiring 4 of their volunteers who were students from Odense Cathedral School. The girls were assigned as street leaflet distributors in the centre of Odense. A perfect solution that benefited both charities. 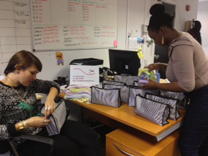 A charity staffed by women who works diligently to help reform women who have committed a crime and support women who are victims of violence or negligence.The Love & Light Project donated emergency fresh packs filled with toiletries for women and children who has to flee from life threatening situations and seek refuge at the Minerva Womens Centre with just the clothes on their backs.

Christmas 2012 we generated DKK 20.000 from sales of 400 hearts sold. This was the beginning of The Love & Light Project where the total amount was designated to victims of hurricane Sandy in Jamaica.